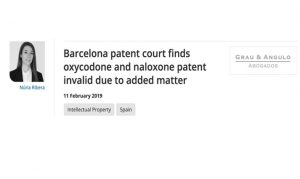 On 19 December 2018 Barcelona Commercial Court Number 4 dismissed a patent infringement action brought by Mundipharma against two generics of its oxycodone and naloxone medicinal product for the treatment of pain (Targin) and upheld the defendants’ counterclaim that the asserted patent was invalid.

In the main proceedings on the merits, the defendants claimed that EP’825 was invalid due to:

As regards added matter, the defendants argued as follows:

The patentee counterargued that all of the claimed features were preferred features within the application as filed and thus constituted a clear pointer that led to their specific combination. Mundipharma, by way of an ancillary claim, also filed an auxiliary request, claiming an oral sustained release pharmaceutical formulation comprising 20mg of oxycodone hydrochloride and 10mg of naloxone hydrochloride.

Shortly before the trial, the European Patent Office Opposition Division announced the revocation of the asserted patent due to added matter.

The court upheld the defendants’ counterclaims and revoked the patent in a ruling deliberated by the three Barcelona patent judges.

The judgment first analysed all of the features of Claim 1 of the patent as granted – namely:

The court stated that there was no pointer in the original patent application that led to the specific five-element combination as ultimately claimed. Hence, the combination of features of Claim 1 could not be directly and unambiguously derived or deduced by the person skilled in the art.

Further, the judgment explained that the claims of EP’825 amounted to an inadmissible generalisation because they omitted essential elements of the invention as disclosed in the application as filed. More specifically, whereas the original application required the formulation to provide an invariable and independent release at all times, the claims of the patent as granted did not require such release to be invariable and independent.

The court found it unnecessary to further tackle the rest of the invalidity grounds brought by the defendants (ie, insufficiency of disclosure, lack of novelty and lack of inventive step).

The judge examined the validity of Mundipharma’s auxiliary request and concluded that it also featured added matter on the grounds of selection and combination of features and inadmissible generalisation.

Mundipharma has not appealed this judgment. As such, the patent’s revocation is final in Spain.